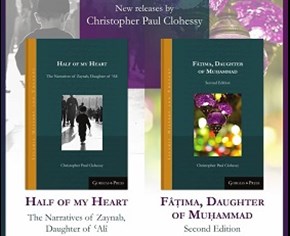 PISAI is proud to announce the publication of two new books in the field of Shī’ī Islamic Studies by Professor Christopher Clohessy: Fâtima, Daughter of Muḥammad (Second Edition, Gorgias Press 2018) and Half of My Heart. The Narratives of Zaynab, Daughter of ʻAlî (Gorgias Press 2018). Women play a substantial role in the history and piety of Shī’ī Islam; this may be because they were the daughter or the wife of some significant personality, or because they have transmitted important aḥādīth, or because of their personal piety, or even because they played a noteworthy role in a decisive historical moment. Especially dominant are the women who belong to the family of Muḥammad, the ‘people of the house’. The importance of Fāṭima al-Zahrā’ is patently clear, as the only surviving child of Muḥammad, the wife of ‘Alī and the mother of al-Ḥasan and al-Ḥusayn. Zaynab, one of the daughters of ‘Alī and Fāṭima, is especially remembered for the role she played at Karbalā’ and in the post-Karbalā’ days, when by her courageous protests before the powers of her day, she kept alive the memory of her brother al-Ḥusayn’s martyrdom, so that its recollection would never be extinguished. These two companion volumes represent the first two substantively academic works on these two key women, based on the primary and secondary Arabic sources, and will hopefully make some contribution not only to the study of Islamic history, but in particular to the study of the Shī’ī tradition in Islam.

Christopher Clohessy, originally from South Africa, is a diocesan priest ordained in 1988. He obtained a License in Arabic and Islamic Studies at PISAI in 2000 and in 2006 a Ph.D. with a thesis entitled Mother of Sorrows: an Examination of the Life of Fâṭima al-Zahrâ’, Daughter of Muḥammad, at the Level of the Selected Texts of Imâmî Shîʻî and Sunnî Islam. Professor Clohessy is part of the teaching staff of PISAI.
The whole PISAI congratulates Christopher for these new publications.