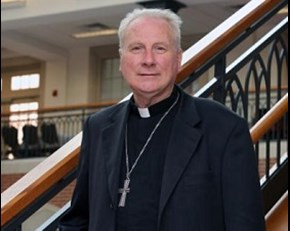 PISAI is proud to announce a new publication of its collection Studi Arabo-islamici del PISAI: PRAISE THE NAME OF THE LORD. Meditations on the Most Beautiful Names of God (English version), LOUEZ LE NOM DU SEIGNEUR. Méditations sur les Plus Beaux Noms de Dieu (French version) by Mgr. Michael L. Fitzgerald. British-born Archbishop Fitzgerald is member of the Society of Missionaries of Africa (White Fathers) and he is one of the Catholic Church’s leading experts on Islam and Christian-Muslim relations. From 2006 to 2012 he served as apostolic nuncio in Egypt. Prior to that he was president (2002-2006) and secretary (1987-2002) of the Pontifical Council for Interreligious Dialogue. Since 2012 he has been living in the house of White Fathers in Jerusalem.
“This series of reflections on the Beautiful Names of God is a remarkable contribution to the culture of interreligious dialogue. Part of the background to the book is the experience of a group of Catholic Religious working in Algeria who have been meeting for some time to explore spiritual themes by engaging with the teaching both of the Qur’an and the Bible. This volume grows more specifically out of talks the Archbishop gave when he drew on this experience and developed it in the framework of an Ignatian type of Retreat. […] For a devout Muslim the Beautiful Names of God are an endless source of enlightenment and edification. They are an invitation to deeper praise of God. In this volume the Archbishop selects some of these names as they occur in the Qur’an and explains their significance for Muslims. He then goes to passages in the Old and New Testament which have particular affinities with these texts. The reader is simply invited to be open and receptive to the wisdom and to the invitation that this experience offers” (from Preface by Archbishop Kevin McDonald).