PISAI publishes periodicals devoted to Muslim-Christian Dialogue. All PISAI’s publications are available for purchasing, singly or by subscription.

Islamochristiana is the annual scientific journal of PISAI explicitly dedicated to Muslim-Christian dialogue. It is composed of three parts: the first part contains in-depth and research studies, reflections and personal witness accounts; the second part, notes and documentation concerning encounters between Christians and Muslims around the world; and the third part, summaries and reviews of books on dialogue. Founded in 1975 and directed for many years by Father Maurice Borrmans, the journal has developed its format over the years. One part of the studies revolves around a monographic subject chosen each year, while others are devoted to Muslim-Christian dialogue in the past and the present. Islamochristiana is published mainly in French, English and Arabic, but articles and studies are also published in other European languages.

In these lasting difficult times, though coloured by signs of hope, the editorial staff of Islamochristiana has proposed an ambitious theme: an overview on how Islamic universities and Islamic institutions of higher education teach about the other religions. Among the interesting contributions Morteza Karimi presents in a detailed way the academic structure of the prestigious University of Religions and Denominations (URD), based in Qom, in Iran. The University is still recent in its founding but highlyopen to the teaching of Christianity and other religions. Assem Hefni describes the history and the gradual transformation of Al-Azhar, the great and prestigious Sunnī university; Albertus Bagus Laksana concentrates on Islamic institutions of higher education in Indonesia; Felix Körner examines the complex situation of Islamic theological orientations in Turkey and their relationship with “Western” theology. The authors thus provide a brief but significant panorama that touches diverse geographic regions but shows a common orientation of the growing openness of the Islamic world in dialogue with other religions.

In the section dedicated to Muslim-Christian Dialogue throughout History Hisham Mostein asks whether Patriarch Timothy I, in his famous dialogue with al-Mahdi, the third Abbasid caliph, truly affirmed Muḥammad as a prophet; Antonio Cuciniello examines a fatwā by al-Suyūṭī regarding the return of Jesus before the final judgment and the rules (aḥkām) that he will follow; Christopher Clohessy places the biblical narrative of the finger that writes the divine judgment of Belshazzar upon a wall in dialogue with texts from both Sunnī and Šī‘ī ḥadīṯ. For the section dedicated to contemporary dialogue Cardinal Michael L. Fitzgerald returns to the Document on Human Fraternity for World Peace and Living Together to present additional developments and possible applications; Ignazio De Francesco, taking the Italian publication of a text by a noted Israeli scholar of Islam as his point of departure, presents Jewish culture’s historical and contemporary approach toward Islam; Mariangela Laviano analyses the thought of the Moroccan thinker Muḥammad ‘Ābid al-Ǧābirī regarding “official” Christianity; and finally, Almudena Soler Sánchez devotes her study to the contribution of Cardinal Jean-Louis Tauran.

The long section Notes and Documents, completed by a special Dossier dedicated to the voyage of Pope Francis in Iraq, collects a rich harvest of encounters, declarations and documents that recount the progress in dialogue between Christians and Muslims in the world, despite the ongoing condition of pandemic. This issue of Islamochristiana closes with a fine collection of Book Reviews dedicated to the study of Muslim-Christian relations, as well as some brief presentations of Books Received by the PISAI library.

The first edition of ETUDES ARABES appeared at Easter 1962: it consisted of a dossier of about 30 pages, trimestral, with the translation into French of some Arabic texts and targeting those who, having completed studies at PISAI, wished to pursue their linguistic commitment to Islamic Studies. Only on reaching edition No. 8, at Christmas 1964, did it become a real publication with an index of modern Arab authors.
In 1981, ETUDES ARABES became a means of support for Islamic Studies in the form of two annual Dossiers containing monographs. Since 1996, publication has been annual, maintaining the formula of an Arabic text with facing translation. The editorial board is made up of teachers at PISAI. 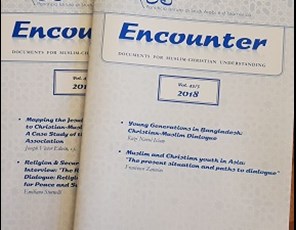 The review Encounter, Documents for Muslim-Christian Understanding, now obsolete, appeared in 1974, in the wake of the setting up of the English section at PISAI. Its primary purpose was to maintain links with former students at PISAI continuing their formation and offering to all its readers documents, research material and witness accounts in the field of Muslim-Christian Dialogue.